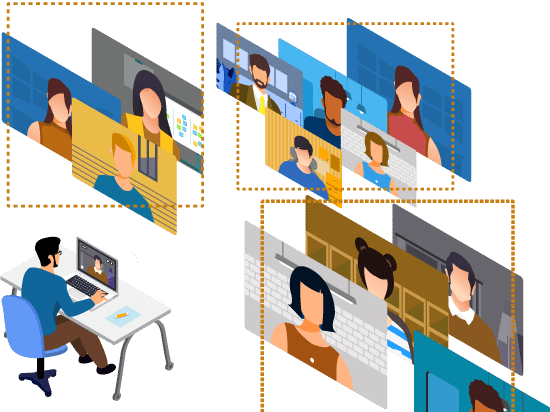 In the first installment of this series, I mentioned in passing that breakout rooms are my favorite feature of Zoom (and WebEx, Teams, etc) but quickly moved on to other topics. This week, I am returning to breakout rooms for a look behind the scenes, sharing how breakout rooms can ensure satisfied attendees at any virtual event. Effective use of breakout rooms begins long before an event’s start time with intentional planning around how often your event should leverage breakout rooms and how long each split should last. The exact answers must be determined on a case by case basis but if you plan to have any interactivity in your session, I highly recommend planning at least one split into breakout rooms.

During shorter sessions, particularly with an audience meeting for the first time or still relatively new to each other, placement of the breakout room in the agenda depends on the level of engagement you want to see throughout the session. My experience has been that breakout rooms are when the cameras come on and the excitement appears so they should be placed wherever you want to see interactivity begin. If the goal is to begin with an attentive audience that engages later in the session, hold off on your first breakout room. If you would like active participation from the start of the session, kicking off with a breakout room icebreaker can help attendees get engaged right away.

The question of how many times breakout rooms should be leveraged depends on the amount of time you are willing to dedicate to the rooms themselves and to the debriefing. Having had a chance to speak together in small groups, there seems to be a nearly universal desire to share some of the insights from a breakout room with the larger group. I have found that setting expectations for a short debrief or survey before sending participants to the breakout rooms can limit the time required for a satisfying debrief but skipping the debrief entirely often washes away the energy created in the rooms. While I have both seen and led events with 2 breakout rooms implemented successfully in a single hour, I call this “the elusive double breakout room” for a reason. Unless you are planning to use a survey debrief or to dedicate the session almost entirely to the breakouts, I recommend an average pace of one breakout room per hour of virtual event.

Regardless of number or timing, making the best use of breakout rooms requires a clear question / task / guideline that should be created and incorporated into the overall event plan as early in the planning process as possible. To be clear myself, the prompts may be intended to trigger an open-ended discussion. What is important is that participants are able to understand the expectations and the question or topics to be addressed before leaving the Main Room.

Even the clearest of prompts, however, will be quickly forgotten unless they are also posted in the chat box prior to sending attendees to breakout rooms as attendees frequently experience the “doorway effect” during the transition from the Main Room. In Zoom, hosts and co-hosts can Broadcast messages to all breakout rooms with reminders of the prompts but these broadcasts are temporary and often overlooked by participants. Even sharing the prompts via chat can be temporary for mobile users, who will lose their chat history during the transition, and there is still no guarantee that attendees will follow the instructions. But as long as a majority of users are on computers, recording the instructions in the chat (and broadcasting a reminder to reopen the chat box) maximizes access to the instructions once the rooms are opened.

Then comes the question of assigning attendees to the rooms. There are several best practices for assigning attendees and I will argue that pre-assigning through the Zoom.us interface is nowhere on the list. Pre-assigning is done by email address and so attendees must log in to the meeting via a Zoom account that is linked to the email address used in the breakout room assignments. When there are no-shows or attendees log on under an unanticipated ID, which is increasingly common as the same devices end up being used for personal, professional, school, and more, these mundane occurrences wreak havoc on the pre-assigned rooms. Alternatively, manually assigning the rooms according to a preset list is a matter of 2 minutes or less for dozens of attendees. I highly recommend creating the breakout rooms during the event.

Readers of this series will know that I believe deeply in never virtually facilitating alone and configuring breakout rooms is a key driver of that philosophy. Of course, from the facilitators’ perspective, the simplest option is to create the desired number of breakout rooms and “Let participants choose room”. However, this approach relinquishes all control over room size, attendee distribution, and may be frustrating for users who have an older version of Zoom and are unable to move themselves into their desired room. This feature is fabulous when the goal is truly for participants to control their own experience but is a poor hack for reducing administrative overhead.

Instead, I recommend using either the “Assign automatically” or “Assign manually” options and ensuring that the person doing the configuration is different from the person leading the session while the configuration is happening (Never Facilitate Alone). The desired number of rooms can be selected on the first configuration screen but rooms can be added and deleted on the second screen, too, so there is no need to select the perfect number at this stage. If “Assign Automatically” is selected, the attendees will be evenly and randomly distributed across the rooms.

When Assigning Automatically, the facilitation team may wish to make some changes to the distribution. A team I work with frequently prefers to assign the facilitators to their own room, a step I usually accomplish by creating an additional room after the assignments are done randomly and moving all of the facilitators into the new room. Hovering over the participant’s name gives me the “Move” and “Exchange” options. Once the facilitators are in the correct room, I can quickly rebalance the others.

Of course, Assigning Manually makes pulling the facilitators into their own room trivial and, as mentioned above, can be a more effective and efficient way to control room assignments than pre-assignment. When manually assigning, clicking on “Assign” pops up an alphabetized list of all the unassigned attendees (clicking on the number of people in a room at any time during configuration will do the same). When attendees have been encouraged to rename themselves clearly, this can make finding the desired room participants quite straightforward. I also often assign manually when I have a list of who not to put together.

There is also the question of how many people should be put into each breakout room. Unless there is a specific reason for pairs or larger numbers, I strongly recommend 3-5 under almost all circumstances. Having at least 3 people in a room reduces the risk that an attendee will be left alone in their breakout room with a black square that remains resolutely on mute. When rooms have 6 or more people, some people begin to “hide” and avoid the desired level of participation. As an additional failsafe against lonely participants, I recommend moving participants automatically into the rooms when their presence and participation is assured but having them manually click the “join” button otherwise. Requiring a participant action allows Hosts and Co-Hosts to monitor if any attendees are left waiting alone too long.

Finally, when it comes to both planning and configuration, setting a timer on the rooms can be beneficial. Knowing how long participants will be in the rooms (and how long the warning message will allow before whisking everyone back) can help set expectations for facilitators and attendees alike. Using the timer in the Breakout Room Options gives participants a countdown clock they can use to ensure that everyone has a chance to speak. I also always give myself the choice to close the rooms manually rather than automatically as sometimes it is more convenient or necessary to extend the time but that is more of a personal preference.

This particular article is all about the nuts and bolts of breakout rooms and has ended up quite long enough without capturing every possible nuance or argument in favor of this versatile feature. I therefore request and encourage you to add your own comments with additional best practices, tips and tricks for leveraging this powerful capability. I am also always more than happy to discuss the finer points of breakout rooms any time, just reach out! At a minimum, I hope that this article offers insights into how breakout rooms can be used effectively to enable readers to uplevel their future virtual events. Breakout Rooms are a powerful silver lining of virtual events and I hope to see everyone making best use of them soon!