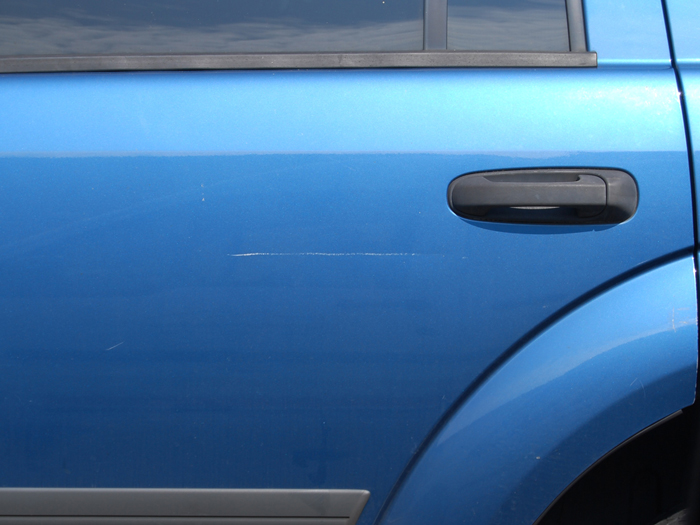 As one might imagine from the title “Surviving a Scratch”, this is an article about small errors, the intense fear that can precede them, and the freedom that actually making one can offer. I lay this out up front because there are certainly situations and actions that are fully worthy of heightened precautions and that carry significant, negative consequences. Should such a situation occur and such a mistake be made, there are numerous experts who offer guidance on rebuilding trust, recovering from devastation, and otherwise are far better equipped than I am to address such serious situations. But for those of us with a tendency to catastrophize the first scratch on a new car and similarly minor events, at least until they happen, I have some thoughts to share.

To begin with, I find that recognizing the differences between crucial errors and inconsequential ones is far easier in the abstract and when talking about other people than it is for my own work or life. For example, I recently started a newsletter and every time I have hit “send” on a new issue, I have been terrified that this will be the issue that reveals me as an aspirational imposter, filling the inboxes of people I know and respect with nonsense. What, you may wonder, is the terrifying event that will reveal my insufficiencies to the world?

Yes, rather than worrying about the overall credibility and value of articles like this one, I often fixate instead on the seemingly dire consequences of small errors and minutiae. Despite the fact that my newsletter audience currently consists entirely of people with whom I have directly interacted, I envision recipients opening the email, seeing a misplaced letter, and rolling their eyes while simultaneously heading straight for the “unsubscribe” button. Never mind the fact that I would personally have a far more patient response to such an error in a message I received rather than one I sent. Such considerations seem to have minimal bearing on the fear that I feel over being exposed as imperfect through this very specific failure mode.

I am focusing so specifically on my typo scenario because this fear, although very real, seems to contradict my personal belief in the power of vulnerability and the need to acknowledge our imperfections and humanity to effectively build trust and establish thought leadership. What has become clear to me over time, however, is that appearing vulnerable is often much easier than actually being vulnerable. There are certain shortcomings and errors that I have no compunctions about sharing but because I am comfortable with these particular aspects of myself, sharing them actually requires minimal vulnerability on my part.

For example, I am quick to admit that I often take a moment to shift gears. When someone proposes a counterpoint or counterargument, my knee jerk reaction is often a hard rejection. Usually, I try to follow that up with some deep breaths and a more considered analysis (because I try to surround myself with wonderful people who are often smarter or more insightful than I am) but the ideal would certainly be to respond patiently in the first place! I continue to work towards this goal and be transparent around my tendency towards snap judgement in parallel. Sharing this particular shortcoming on my part offers the appearance of vulnerability by openly addressing an area of personal development. However, because I have long been an open book on this front, minimal actual vulnerability is involved.

But then it comes to my identity as an engineer and my technical prowess, much like my newsletter, I am often far more reluctant to reveal the slightest trace of weakness. As many of you know, I have been teaching Software Quality Assurance for the Berkeley Extension School but few people realize just how daunting an experience this has been for me. I am quite confident about the “Quality Assurance” part of the class but the “Software” piece has made me nervous from the day I first agreed to the assignment. Much of my preparation for the class centered around ensuring that I was able to use the more technically complex tool I was planning to offer my students. Throughout the first 6 weeks of instructing, I remained terrified that they would discover my lack of fluency in Python and the abysmal coding environment I have cobbled together specifically for this course.

Given that at least one of my students has connected with me on LinkedIn already and that many of my other connections are on my newsletter distribution list (you can be too, sign up here!), you might believe that this article summarizes my triumph over these fears. This would then be the point in the article where I reveal that I have overcome my challenges and am successfully balancing the impact of small errors with my preemptive emotional response. Nope. I am still terrified. I am, however, also feeling brave today because in the last two weeks, I experienced two separate “worst case scenarios” and survived to tell the tale.

First, my March newsletter contained the dreaded typo. Having the first major typo be in the body text somewhere would have been bad enough but to ensure there was no doubt about the first scratch on my shiny newsletter, my typo was in a headline! A few kind people pointed out the error. I suspect that plenty of others noticed. But despite the typo, which was in the headline section referencing my latest article on virtualizing events, dozens of people still clicked the link to read the article. Many of them even commented on the article after reading it!

Second, a student asked me at the end of the 7th class to demonstrate some scripting in the more complex tool, the one that uses Python. While I could, and probably should, have seen this ask coming on that particular day, I was still caught by surprise. So I found myself pulling up the command shell and doing some wildly unsuccessful improvising before finally resorting to simply following the tutorial on my other screen step by step. I would be shocked to learn that my students were blown away by my skills but they also seemed to remain just as confident in my overall knowledge, experience, and abilities as they had been before my demo.

The point is that, in both cases, the numerous hours and significant effort I have put into building materials that I can be proud of seem to have successfully outweighed the consequences of small setbacks. Hooray! But I have been in this position before and failed to fully internalize the takeaway that small errors can indeed have small impacts so I am trying something new this time around. I am sharing my experience and my lessons learned with all of you.

I am acknowledging moments when I have proven my imperfections and humanity but I am emphasizing that these incidents are just tiny dots in the larger picture of what I have dedicated so much time and effort to building over the past few months. While I will continue to carefully proofread my newsletter, and have others do the same (that typo slipped past me and two different pre-readers), my primary focus will remain on sharing materials and insights with others rather than on typographical perfection. Similarly, while I will continue to work on upleveling my scripting in case a future class asks for a similar demo (and may actually install Emacs or Vim before the next semester starts), I will remind myself that Quality Assurance is far broader than scripting in any one language.

To continue placing inordinate emphasis on potential pitfalls would be doing myself, my audience, and my students a disservice. Thoughtful content with the occasional typo will bring far more value to readers than bland drivel with impeccable grammar. Understanding the high level concepts and implications of Quality Assurance will give my students far more earning and impact potential than spending 30 minutes of our 30 hours together watching me script with the greatest of ease. Achieving at my highest level means focusing upward and outward, and allowing myself to put a few scratches in the paint every now and then. So for those of you who noticed the typo or my stilted scripting, I simply ask that you continue to bear with me. I will be striving for great things in the future and I hope that you will be excited enough for the ride to ignore some scratched paint here and there.