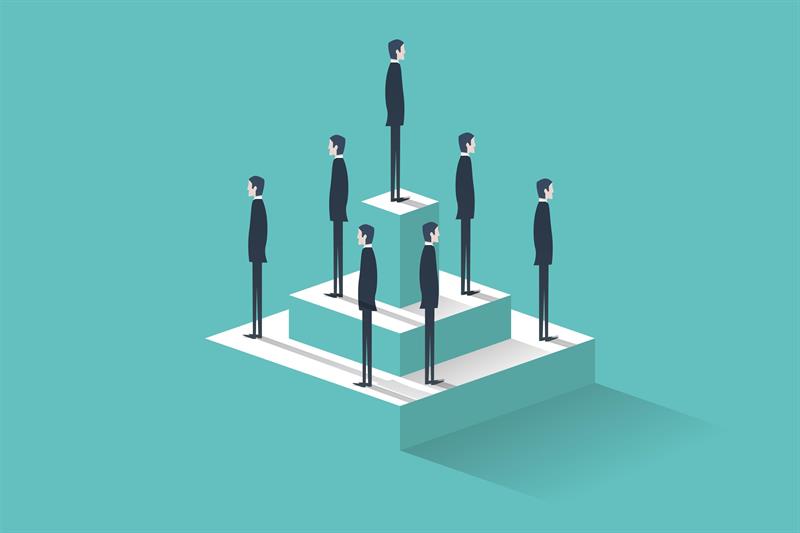 Versus or Variation? Hierarchy and Self-Organizing Teams

Let’s just start by calling out the elephant in the room: “hierarchy” can be a polarizing term. In her article last week, Lisa Levesque acknowledged that “hierarchy can be helpful in streamlining decision making (or helping to avoid mayhem)”. I agree with that statement because the key word she uses is: “helpful”. Like so many other topics I address in these articles, a hierarchy is a leadership tool. As with all tools, a hierarchy is only as effective as the use to which it is put and the expertise with which it is leveraged.

To best address the potential advantages and disadvantages of hierarchical structures, it is first important to separate the concept of a hierarchy from the “command and control” mentality. There is nothing inherent to a hierarchical organization that requires the individuals in positions of authority to leverage command and control. Hierarchical structures are so pervasive that even progressive leadership models, from servant leadership to humble leadership, assume that the leaders are operating within a hierarchy.

In fact, “self organizing” structures are often held up as the counterexample to traditional hierarchies, but while they do buck some historic hierarchical norms, these structures still retain varying degrees of embedded hierarchy. Holacracy, a self-organizing organizational design philosophy brought to mainstream attention by Zappos in 2014, may be best visualized as a series of interlocking circles rather than a pyramid but the circles are still organized hierarchically. In a Holacracy, individuals opt in to their roles and responsibilities and may even inhabit multiple positions, a philosophy that is quite different from the traditional assignment of a specific role to a specific individual.  However, the resulting structure can be traced, from any given position, back to the Lead Link of the Anchor Circle.

Regardless of whether responsibilities are assigned or opted into, some individuals tie their identities tightly to their position in an organization, which can make it difficult to remember that corporate structures are hierarchies of roles rather than of people. Most individuals within an organization carry two types of authority: that which is derived from their position in the hierarchy and that which they inspire in others through their actions and interactions (aka “leadership”). Self-organizing hierarchies, like holacracy, simply emphasize this distinction by enabling individuals to fill multiple roles within the same hierarchy. This forces a clearer distinction of personal and positional authority by allowing for varying dynamics in different contexts. Said differently, hierarchies in self-organizing structures like Holacracies are dynamic rather than fixed, as they are in traditional corporate environments.

If hierarchies and self-organization can co-exist, the question then becomes whether all organizations are “doomed” to accept a variation of hierarchical structuring regardless of the participants’ desires. Just to complicate the subject, I would argue that the answer is both yes and no. “Yes” because, in many states within the US at least, corporations are required to define and assign certain roles. The simple necessity of some individuals accepting legal responsibility on behalf of a group creates an effectively inescapable two-tier hierarchy but I do believe that it is possible to limit the formal role of hierarchies to the bare minimum required by law (the “No” part of the answer). Companies like Galois are organized around binary agreements between colleagues, in their case defined by the Collaborative Web. But when it comes to basic issues of governance, even Galois relies on Councils, a variation on purely role-based hierarchies of authority, to streamline decision making.

So there may be no true escape from hierarchies in corporate America but perhaps this is cause for celebration. If hierarchies are everywhere, then the most successful, supportive, and engaging organizations must have found a way to earn those adjectives despite some degree of hierarchy. All an individual who wants to build a better company needs to do is think carefully about how they leverage this powerful tool. There are some individuals who prefer that their professional lives be governed by clear and consistent guidelines. Lisa Levesque addressed this notion in the second half of her excellent article on customizing corporate cultures. Such strict limitations on autonomy would be stifling for some but can offer clear paths for advancement and reductions in decision fatigue for others. Those who would feel most stifled are individuals who thrive in low structure environments and are energized by green fields of opportunity. These are the people most attracted to dynamic hierarchies, such as Holacracy, Collaborative Web, and other forms of self-organization.

As a business owner or leader, therefore, instead of asking, “how can I avoid a hierarchy for my organization,” the question becomes, “who do I want to attract and support and how would I like to structure positional authority to do so?” There is no single answer to this question and even articulating a complete set of guidelines would likely require a book rather than an article. The goal here is simply to encourage leaders to realize that there are options. Understanding that hierarchies are a flexible and powerful tool rather than a rigid concept or inherent evil can open a new world of possibilities for leaders across industries. I hope that the conclusion of this article will prove to be a first step for some on the path towards a customized implementation that shapes the culture and community they have always dreamed of leading.